I slowed my pace. As I looked up and over at Sara, the hood of my jacket shifted then slid, exposing my cheek to the chill of Denmark in December. Actually, it was technically January now. (Sara is an Aarhus local; I became friends with her when she came to Santa Barbara in September for a two-month international student-teacher exchange, which is what I am participating in now.)

"Yes?" I asked, without really wanting to know the answer. It was almost five in the morning. I'd been drinking for the past eleven hours. I was in no state to face "a problem."

Germans have their beer houses, Irishmen their whiskey. And I had heard all about the wild nights in Spain and Italy from friends who had studied abroad in college. But I had no idea how hard the Danes party. I chose quite the evening to find out.

Marisa and I had debated for weeks where to spend New Year's Eve. Munich and Berlin were south, Copenhagen was east. We had our Eurail passes delivered to Sara's in Aarhus so that we could leave our decision open until we arrived in Denmark. I normally don't mind long or multiple travel days, but I was learning that multiple long travels days were far from appealing. After a 30 hour travel day to Aarhus, I was in no rush to leave.

We decided to ditch the hypnotic lure of ringing in the new year in a novel international city. After an evening of catching up with Sara, and finding out that her friends had extended an invitation to their New Year's Eve dinner, the attraction to the bright lights of a big city suddenly felt hollow. Or maybe it was the jet lag. But why party with strangers when you could spend it with friends, and friends of friends?

In any case, I couldn't be happier with the decision.

For one, I woke up to this. The snow had stuck for our first morning in Denmark (January 30th). Waking up for the first time in a new city can be really disorienting. Sometimes you're awoken by bustling street traffic, or in the silent dead of night because of the time change. Sometimes you feel the unfamiliar ceilings closing in, or the budget mosquito nets swinging open. But this was serene. This was lovely.


After a deliciously slow morning (and lots of coffee to remedy the 9-hour time change), we spent the day exploring Aarhus. My favorite part was the rooftop of the Aarhus Art Museum, called "Your Rainbow Panorama." And it is just that -- a walkway with a 360 view of the city through all of the colors of the spectrum of light. The underlying concept is based on Dante's Divine Comedy. You are encouraged to explore how your senses change as you move from warm to cool, and vice versa. It's also meant to act as a visual compass for the city -- when viewed from a distance, the work presents different colors that inform your location.


We closed our rounds in the city by stopping into a shopping center for the next day's essentials. Read: drinks and decorations. And cake. Can't forget the cake. We stopped into a bakery and (willingly) paid far too much money for the traditional Danish pastry eaten at midnight, kransekage. Kransekage is made of marzipan, and it is magic. Well worth the dough (ha?). It can be sold as a stack of rings adorned with Danish flags (often the chosen shape for weddings), but the bakery had just one kransekage left, in the shape of a heart with loose mini cakes in the center. We were lucky to be left with the one. Given that all of the seven dinner guests were female, the heart was kind of fitting.

That night Sara made Marisa and me our first homemade Danish dish, frikadeller, or Danish meatballs. She served them with a red cabbage and clementine salad, potatoes, and "brown sauce" (gravy). It was one of those meals where I willingly took seconds (OK, thirds) knowing full well I would hate myself afterwards. It was well worth the post-dinner resentment. 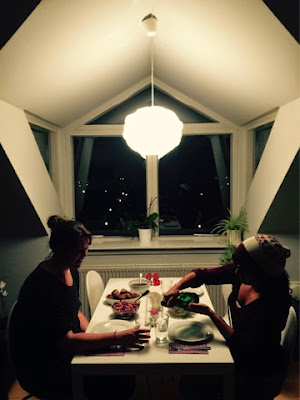 We spent the next day preparing for the evening. First, a trip to the grocery store to get everything we hadn't bothered to get the day before...all of the ingredients for our contribution to dinner. As I mentioned, Sara, Marisa, and I were going to join Sara's friend, Nana, and three of her friends, Line, Anna, and Sidsel. An all-girls dinner party. The menu took a little more thought since some of the guests were gluten-free, lactose free, and/or pescetarian, but we managed. In fact, dinner was really delicious. And fish is traditionally served on New Year's anyway, so it worked out.

The table was already set and decorated when we arrived but we were tasked with adding even more flair to the room. I had never had a sit down dinner for New Year's Eve before. My family usually throws a big party for my little sister's birthday (New Year's Eve) and my birthday (New Year's Day) combined. We have trays of food and treats set out and guests spend the entire evening picking and eating throughout. So this was different, but I was all the more excited for it. 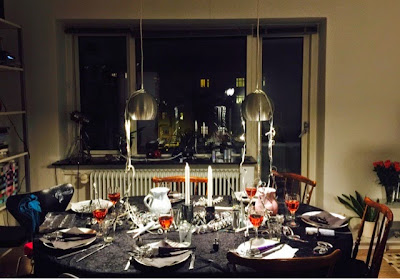 But first, in Danish tradition, we watched the Queen of Denmark deliver the annual speech at 6 PM. It was, of course, in Danish, so I didn't catch much but I did note that she spoke of welcoming all Syrian refugees. We gathered around the ottoman and ate our gorgeous appetizers -- heart shaped rye bread topped with salmon, roe, and a yogurt based sauce, among other things I forget. 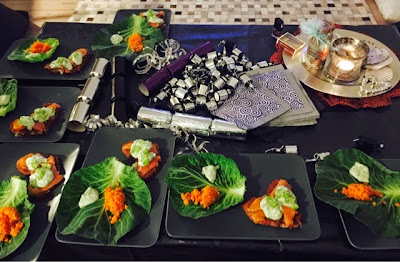 Then it was onto dinner. We had a perfectly cooked halibut topped with chopped, roasted peanuts and a banana based sauce. We also had cheese and three different salads: a green salad, a potato salad, and a quinoa salad. Dessert was a gluten-free brownie and lactose-free ice cream. The best part? The food was so light (while still somehow tasting delectably rich) that I didn't feel bloated or bogged down. More room for celebratory drinking.

We spent the rest of the evening playing drinking games, exchanging stories about Danish and American culture, and laughing. A lot. Aside from spending it with my family, it was the perfect way to spend New Year's Eve. I was incredibly thankful for how easy it was to meet their company. The girls all had such different personalities -- one was an artist, another had gotten one Master's in Venice and was getting another in Beijing (after a hiatus in Nepal); one was a mother to two young boys and another was studying gemology and working as a product demonstrator at a toy store -- but everyone was immensely agreeable and fun. I spent whole minutes in laughter. I learned two new drinking games, "Hi, Jack" and "Whoosh, Smash, Bush" that I look forward to teaching my friends back home.

Before long it was close to midnight. Another Danish tradition is to watch "The 90th Birthday" (also known as "Dinner for One") broadcast on TV about 15 minutes to midnight. It's a short black-and-white comedy sketch from the 1960s. I had heard of it before from my boyfriend in college whose family watched it every year. I thought then that maybe it was unique to his family, or maybe to Germans, but apparently it is a cult classic in many parts of the world, including Denmark. The Danes love it; everyone I spoke to has watched it every year since they can remember, and never tire of it. We turned it into a drinking game.

Right before midnight we all climbed onto a chair, couch, or other surface and "jumped into the New Year" when the clock struck twelve. That may be my favorite new tradition.

Then it was onto champagne and kransekagre. And (at least) 45 straight minutes of fireworks. It seems the Danes love their fireworks. Rather than an establishment like a theme park or local agency putting on one spectacle, many Danish families buy their own arsenal of fireworks and set them off all over the city. The night sky screamed with bright proclamations of excitement, amusement, and wonder.


We couldn't leave the apartment without another typical Danish practice, shots of thick licorice liquor. I forget the name. Or maybe I never remembered. Then it was off to the bars downtown. First up, an Irish bar. My eyes are feeling heavy so I'll skip over those events. I doubt I'd tell them accurately anyhow. Then we walked over to a German bar called Heidi's, known for dancing. It was at that point that Sara flagged me down to share "the problem." 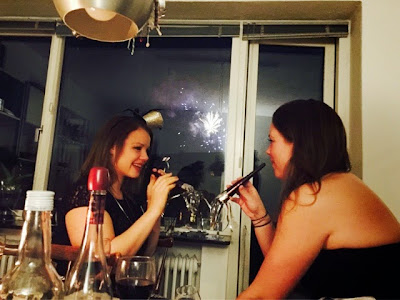 After a night of gleeful revelry (and a customary belligerent meal of, go figure, a burger and fries), we caught the 6:30 AM bus home. By 7:15 AM I wiped off (what was left of) my red lipstick and mascara, drank as many glasses of water as I could keep down, and crawled into bed. Five hours later I squeezed my eyes tighter, as if that would make my alarm (or the need for it) go away. I had a train to catch.

I dragged my feet to the bathroom, weighed down heavy with self-pity and loathing. I felt every drop of wine, beer, screwdriver, champagne, licorice shot...ugh.

That all melted away when I walked by the living room to see sweet Sara standing in the middle of Danish flags and blowing up a red balloon. She had gone to bed later than me and woken up earlier. She decorated for my birthday. (Danes really love their flag -- my host mom tells me they put it up any chance they get -- birthdays, neighbor's birthdays, weddings, holidays, even funerals)

While I made my best attempt to pack a weekend bag, Sara whipped up the birthday omelet I had reluctantly requested the day before. When I had asked her once if there were any traditional Danish birthday practices, she answered, "Only that you get whatever you want."


Somehow, someway my sorry behind made it on the 2:30 PM train with 12 minutes to spare. It was off to Hamburg, Germany to spend a few days exploring before the start of teaching.

But that's a whole 'nother story.

Thanks for reading this one.

Happy New Year to you and yours. Thanks again for the birthday wishes. Seven days in, 27 looks good yet. 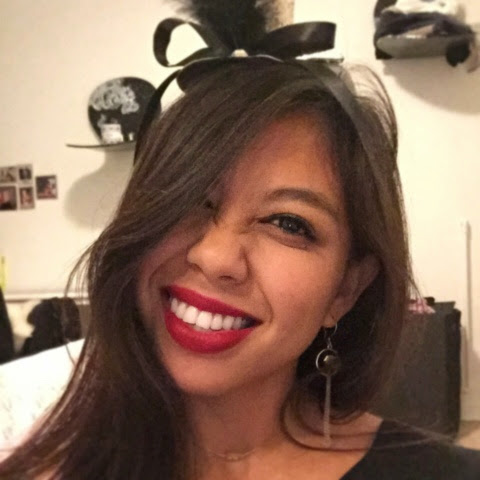